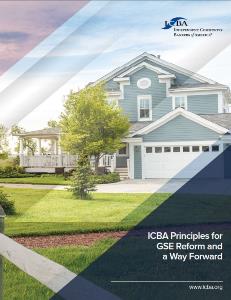 ICBA said it is largely supportive of proposed amendments to the Federal Housing Finance Agency’s final capital rule, though it cautioned the agency not to allow Fannie and Freddie to become overly reliant on credit risk transfers.

Background: The proposed changes would modify aspects of the final rule that disincentivize the government-sponsored enterprises from transferring credit risk to the private markets. Amendments would:

ICBA Letter: In cautioning the FHFA on credit risk transfers, ICBA said CRTs should be used in conjunction with rebuilding robust levels of capital, the latter of which is ultimately the best way to protect taxpayers during an economic downturn.